Walleye Baits covers the best bait and tackle for catching this crafty fish. Compare jigs, lures, and more. Learn their habits and characteristics and the strategies that can help you land one of the craftiest adversaries fresh waters have to offer.

Take a look at all the walleye baits and tackle items available. You’ll find walleye rods, reels and combinations and plenty of lures, jigs, spinners, grubs and harnesses. We also have hooks, snells, sinkers, as well as books and DVDs. All are from quality merchants offering well-known brands like Loomis, Abu Garcia, Shimano, Daiwa, Northland and Lindy.

Luckily, social distancing and fishing can be pretty compatible. But, though you’ll have access to your favorite waters, its becoming more difficult to find local bait&tackle shops open. Not to worry, because thanks to the internet, we can still stock up on fishing line, find that new rod or reel, and enjoy our favorite sport. We’re affiliated with Bass Pro Outlets, so check our shopping pages, we can hook you up!

The ice will be out soon enough and it’s time to think about early Spring walleye, break out the gear and review the best strategies for bringing them into the boat. Spring is a varied season that can be broken into three distinct phases.

Once the water temperature has reached the 38-44°F range, the pre spawn begins as walleyes migrate to their spawning grounds. They will stage themselves on or near these grounds until the spawn, which peaks at about 42-50°F. Walleye spawning grounds are typically shallow, rocky areas in water that moves fast enough to keep the eggs well oxygenated and free of silt.

River walleyes will spawn near dams and other man made or natural obstructions that impede their travel any farther upstream. They also like areas where tributaries feed into the main river. Because shallower river waters warm up quicker, these walleyes usually spawn earlier than their lake brethren.

Lake walleyes are either stream or lake spawners. The stream spawners will stage around structures at harbor mouths and river inlets until it’s time to move up the tributaries that feed into the lake. Lake spawners will make for the shallows when it’s time. They, too, prefer gravel beds, but will settle for hard sand bottoms if habitat dictates. Nature likes to spread its bets when it comes to species survival, so you’ll generally find both types sharing the same waters.

During pre-spawn, the males will move into shallow water earlier while the females will continue to hold in deeper spots until spawn. The water will be cold, so they’re not going to be particularly aggressive feeders. But, if you fish them slow, with big bait, you stand a good chance at taking two or three. Most of the usual bait fish have yet to hatch, so walleyes are looking to older, larger fish that survived the winter. Try large minnows on a Lindy rig and troll as slow as possible to give those lethargic ‘eyes a chance to think and react. When they do hit the bait, let them have some line and time before setting the hook.

Walleyes will spawn at depths ranging anywhere from 1 to 20 feet, but between 3 and 10 feet is usually your best bet. You’ll find them close to shore above those gravel or rocky bottoms where there is current sufficient enough to provide the best environment yet not sweep the eggs away. Minnow plugs are often the way to go at this time, but live minnows are a great alternative when the plugs aren’t working.

The map shows when you can expect the spawn to begin, give or take a week or two, depending on the weather. It’s also important to remember that in most northern states and Canada the walleye fishing season is closed during this period to stop poaching when spawning walleye are most vulnerable. This practice is still debatable in some circles, but the prevailing thought is that limiting the season helps maintain fish population levels. In many southern and western states, however, the season is year round. So, check your local fishing regulations to see when you can hone in on early season walleyes.

Once the spawn has concluded, walleye like to take a breather and recuperate. This can last from a few days to a couple of weeks – not a great time to be landing your limit. They aren’t particularly hungry and between rests, they’re beginning to transition to their summer spots. But, those deeper, summer locations won’t have any bait fish yet, so you’re still likely to find walleyes close to shore where foraging is better. Look for them just off from the spawning areas around the first drop-off. Trolling spinner-bouncer combinations or crankbaits can be very effective, but take it slow. Somewhere in the 1.5 mph range is more likely to attract a walleye still trying to shake off its post spawn lethargy.

Then again, sometimes nothing beats live bait, especially in the spring. Night crawlers and minnows are often a good choice. If the fish seem particularly active, by all means go with the hard baits. But, if their bites are tentative, tipping a jig with a minnow or crawler can help pique ol’ marble eye’s interest to go for the easy meal.

Looking to land that 10-pounder? Night fishing during this season offers a great opportunity to catch a real trophy. While cooler spring days keep the males close to shore, it’s near and after dark that the large females move in from their deeper holding spots to feed in the shallows.

And, by the way, if you don’t have a boat or aren’t ready to haul it out yet, bank fishing or wading in the shallows can be very productive this time of year. Walleyes will be close to shore where the water is warmer and bait fish begin to proliferate. Like a great example? Check out my nephew’s dusk catch.

Spring may be the most challenging time of year to catch walleyes, but it’s also the most rewarding. There’s nothing more satisfying than beating the odds and if you do your homework and experiment a bit, you’ll get your bragging rights.

Don’t have a scale or forgot to bring it? Try this calculator. Just plug in the relevant numbers for a pretty fair estimate of your trophy catch’s weight. There are all kinds of formulas for approximating weights, but this calculator has been calibrated to the known lengths/girths of the largest walleyes on record. Be sure to measure from the front tip of the lower jaw to the very end of the tail. Then measure the girth at the widest part around the body.

If you’re using a tape measure, lay the fish flat on top of it. Don’t make the mistake of pulling the tape over the top of the fish, because you’re likely to bend the tape over the fish’s contours. That will give you an inaccurate length that won’t pass muster with Fish & Game on those closer calls. 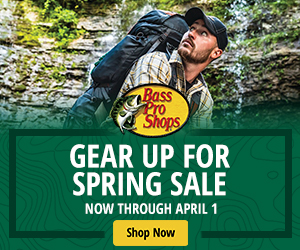 Where to Find and Catch Walleye - Spring Walleye Fishing

Where to Find and Catch Walleye -- Spring Walleye Fishing

The Rapala Original Floating Minnow is the lure that started it all and is still one of the most popular lures around. Whether twitched on the top as a surface bait, retrieved as a shallow runner, weighted with a split-shot for medium-depth swimming.

One of the great walleye baits,  these jigs have a unique flat-footed design that keeps your bait in a natural ”feeding” position, just out of bottom debris. Great for vertical jigging in current. Upsized wide-gap premium hook; sharp, vivid colors. 6 pack.

How to use - Rapala Shad Rap
Buy Now

When you need to get deep, reach for a Smithwick Walleye Deep Floating Rattlin’ Rogue. This proven minnowbait with the extended diving tip floats at rest and digs down quickly when on the move. Equipped with loud fish-attracting rattles

A natural for walleye, the Rapala® Down Deep Husky Jerk is designed to reach depths approaching 20′ on the troll and more than 10′ on the cast. Choose from painted, silver-plated finishes or the hot glass patterns with a transparent body and holographic foil spine that reflects light in all directions.

How to use - Rapala Down Deep Husky Jerk
Buy Now